London Bookstore During the Blitz, 1940 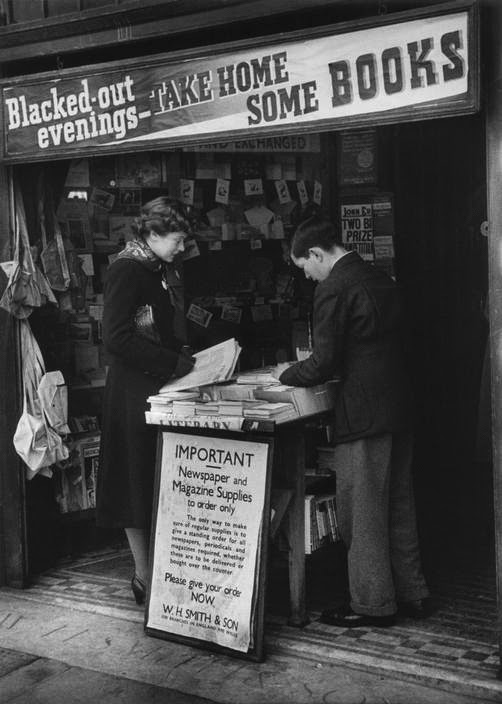 Photographer George Rodger took this shot of a W H Smith & Son bookstore in London, 1940. I found the image in Magnum's collection.

In September 1940 the German Luftwaffe launched a campaign of terror bombings on cities in Southern England. The British government put regulations in place that required citizens to cover up their windows at night. All outdoor lighting was extinguished as well. The blackout made getting around in public difficult (and often dangerous) after sundown, so it was easier to simply stay home and read. The blackout restrictions did not end until Germany's defeat in the spring of 1945.

The sign in the photograph's foreground tells customers that newspapers and magazines are available only to subscribers. This was due to the strict paper rationing during the war years. The military had tremendous needs for paper, so publishers had to carefully conserve their paper allotment.

Shire Publications has a lot of nice small histories about The Blitz and the British homefront. Check out Wartime Britain by Mike Brown, The Blitz and The 1940s Home by Peter Doyle.
Posted by Andrew at 10:32 AM 0 comments