I had been meaning to read a copy of Publishers Weekly from the war years. Unfortunately, the magazine’s digital archive doesn’t go back that far, and I couldn’t find a library nearby that has back issues. So, I went ahead and bought a random issue that I found on abebooks.com. Boy, oh boy, did I ever luck out.

I was surprised to see that August 8, 1942 issue focused most of its articles on book design. And the issue itself was the debut of a new look for the magazine. After flipping through a bunch of ads for new book releases, the articles are preceded by an editorial by the magazine’s editor Frederic G. Melcher (who was also one of the directors of The Council on Books in Wartime).

Charles C. S. Dean was the outside designer hired to work on the redesign. There is a nice biography of Dean further on in the issue. I really like his hand lettered treatment of the magazine title. Such a contrast to today’s app button style (and how long is that treatment going to last now that “flat” is replacing skeuomorphic design?).

The bio explains that Dean took the Goudy of the magazine’s previous masthead and modernized it. I’ll have to find a 1941 issue to compare the cover designs. For the body text he chose the font Caledonia, designed by William A. Dwiggins in 1939. This issue I bought also has an article about Dwiggins, which I'll scan for a upcoming post.

The Office of War Information and Book Publishers in WWII


In March 1942 the Office of War Information* was established to coordinate government efforts to influence the public opinion of Americans and citizens of other countries. Essentially, it was a the US department of propaganda. The OWI censored the media’s reporting of the war. It produced and circulated pamphlets, magazines, posters, photographs, films, and radio programs. And, most interesting to me, the office worked to publish books.

*For its first two months it was called the Office of Facts and Figures.


The Office of War Information split its book efforts into two separate sections based on the region they handled. There was the Domestic Book Bureau (initially named the Book Division) and the Overseas Book Bureau. A young publishing professional, Chester Kerr, was the first to head the Domestic Book Division. Since 1940 Kerr had been director of Atlantic Monthly Press, a book publisher in Boston. Before that his first job out of college had been an editor at Harcourt, Brace, and Company (1936 to 1940).

The government’s OWI had a very cozy relationship with the private American book publishing industry. Much of the office’s staff was made up of senior publishing men. Chester Kerr was joined by Harold Guinzburg and Milton B. Glick (of the Viking Press), Archibald G. Ogden (of Bobbs-Merrill), C. Raymond Everitt (of Little Brown), Paul Brooks (of Houghton Mifflin), George Stevens (of Lippincott), Cass Canfield and Simon M. Bessie (of Harper & Brothers), Edward H. Dodd (of Dodd, Mead), John Farrar and Philip Hodge (of Farrar & Rinehart), Trevor Hill (of Doubleday, Doran), and Keith Jennison (of Henry Holt).

In the same month that OWI was activated members of the book publishing industry were meeting to form their own nonprofit organization to help the war effort, the Council on Books in Wartime. In the council's earliest meetings they were joined by OWI’s Chester Kerr.

In August of 1942 Kerr arranged for a committee from the Council in Books in Wartime to come to Washington for high-level meetings. The publishing men spoke with representatives from the Office of War Information, the Department of State, the War Department and the Navy Department (the 1940s forerunners of today’s Department of Defense), the government-published Infantry Journal, the Library of Congress, the Office of Censorship, the Office of the Coordinator of Inter-American Affairs, the Office of Education, the Office of Price Administration, and the Treasury Department. The CBW’s Washington Committee was made up of W. W. Norton (committee chairman), Marshall A. Best (of The Viking Press), Robert F. De Graff (of Pocket Books), Walter W. Frese (of Hastings House), Frederic G. Melcher (of Publisher’s Weekly), and James S. Thompson (of McGraw Hill Book Company).

The basic result of the conference was that the CBW agreed it would help produce, distribute, and promote books and book-related programs** that the OWI deemed important for the American public during the war. While the agreement did put government influence on private business, the CBW reserved the right to reject OWI recommendations. For the next three years Kerr would spend one day each week in New York City so that he could maintain close contact with the publishers.

**For instance, Kerr had suggested to the CBW that it create a national radio program to remind Americans of Hitler’s 1933 book-burning.

The Office of War Information planned to sponsor a series of new books to be published and sold in the US each year. Their first and only project with the CBW was A War Atlas For Americans. In July 1944 Congress removed OWI’s funding for books or pamphlets intended for the US market. Partly a political move, the funding was axed because conservative lawmakers saw it as another of President Roosevelt’s liberal money-wasting New Deal projects. OWI’s book production was allowed to continue in its Overseas Book Bureau because it was considered useful in spreading American influence abroad.

With help from the Council on Books in Wartime, the Overseas Book Bureau wanted to make translated American books available in European bookstores immediately following liberation by the Allies. During the German occupation European publishing had been crippled. Publishers were destroyed and book shelves were stocked with pro-Nazi books. It was decided that American books could help deprogram populations who had lived under Nazi propaganda. And the publishers recognized a side-benefit in opening a new market for American books after the war.


In March of 1944 Chester Kerr transferred to the Overseas Book Bureau. Kerr and the leadership of the CBW decided to send existing American novels and nonfiction that happened promote America’s form of democratic society. It was thought that commisioning new pro-American books to give out for free would look too much like blatant propaganda. The chosen books were officially published by Overseas Editions, Inc. (OWI and CBW were not mentioned on the copyright page). Books were printed in the US in four languages: English, French, Italian, and German books were the last to be published. Finished books were then shiped across the Atlantic.

The London branch of The Office of War Information, headed by Harold Guinzburg (President of The Viking Press), operated a parallel program: books by American authors for distribution in Europe. Its books were called the Transatlantic Editions. Since these were the first OWI books able to put into action, they were translated into French and Dutch, the languages of the first Europeans to be liberated.

OWI set up a similar book program for the Pacific. Chinese-language books were produced, while Japan was excluded. OWI had been focused on Europe, and it had not planned for Japan sudden surrender. The Psychological Warfare Branch of the American miliary government in Japan handled book programs there, working with their allies the British and Russians. Directed by the US government, Japanese publishers released Japanese-language editions of American, British, Russian, and French books.

"The Office of War Information is Created" on the National World War II museum blog.

Hench, John B. Books As Weapons: Propaganda, Publishing, and the Battle for Global Markets in the Era of World War II.

An interview with author John B. Hench.


I also referenced my copy of A History of the Council on Books in Wartime (1946). This book is long out of print, but it can be found at some university libraries.
Posted by Andrew at 11:18 PM 0 comments

Last week I bought a copy of the 1945 Armed Services Edition of James Thurber’s My World—And Welcome To It.* I noticed that the last page (which is usually the last page of text or is just blank) has a little ASE logo on it (3/4 inch wide).

*This book is a collection, which includes Thurber’s short story, The Secret Life of Walter Mitty. 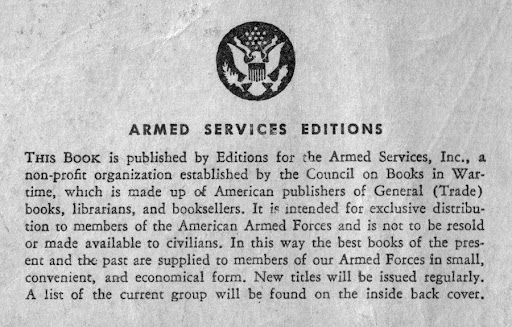 I don't know who designed the logo, or why it didn’t appear in all of the ASEs. The inside front cover of each ASE included a simplified seal of the United States along with a description of the book program. This would have been an ideal place to put that ASE eagle logo.

The Princeton University Library has a collection of Council on Books in Wartime documents. I bet buried in there somewhere is a record of who designed the seldom-used ASE logo.
Posted by Andrew at 10:03 PM 0 comments