In early August I received an email from Brian Anderson, asking me about the above page scan. Anderson is a collector of the WWII era Armed Services Editions. These were cheap paperbacks distributed to the troops for recreational reading during the war. This particular ASE had an interesting unit insignia stamped on the inside. It turns out the book was part of the library of the 13th Major Port, a unit to which my grandfather's battalion was attached during service in Antwerp, Belgium.

I was happy to be able to confirm what unit the cat/13 insignia came from, and I was very interested to hear about Anderson's collection. He has multiple books with stamps which show they were held in the libraries of army bases, hospitals, and naval ships. I thought it would be cool to post them here. While the other stamps lack a stylish graphic, the variety of rubber stamp typography is interesting for a designer like me to see.

The stamps also provide a little bit of context into the book's life, that would otherwise be lacking. For instance, one of these stamps says "U.S.S. Ranger Library". It's fascinating to know that this copy of A. Wolcott: His Life and His World was read by sailors who were aboard the aircraft carrier that took part in Operation Torch, the Allied invasion of North Africa. 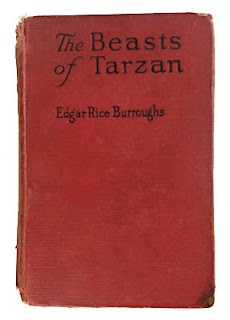 This month I bought a book which had actually been part of the Victory Book Campaign. It's a 1916 edition of The Beasts of Tarzan. This is clearly an example of someone cleaning out their home shelves, rather than buying a new book for the troops. The VBC asked for books published no earlier than 1930. Organizers specifically asked that people donate adventure stories, so the subject of this book was appropriate even if it was an older title.

On the inside cover is a rubber stamp crediting the American Library Association, the American Red Cross, and the United Service Organizations. The appearance of the plain text stamp is a little disappointing when one considers the Victory Book Campaign had an excellent logo. 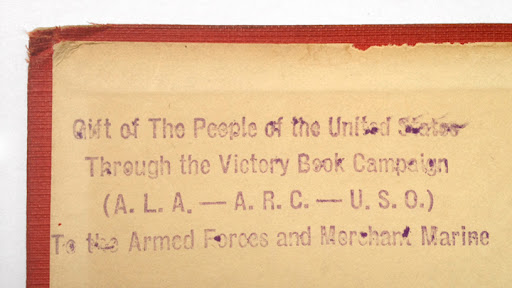 Newspapers articles promoting the campaign suggested that people write their name or a personal note for the GI recipients. I'll keep my eyes open for one of these personalized books but they'll be hard to find. Vintage book dealers usually don't make mention of the inscriptions in their books. I did manage to find a few interesting book inscriptions through Google's news archive.

An eloquent book inscription was printed in an article about the VBC, appearing in the Pittsburg Post-Gazette, February 25, 1943:
"From Miss Patricia Heffner, daughter of Mr. and Mrs. Frank Heffner, 1706 McElhinny Ave., Lincoln Place, Pittsburg, Pa. Born September 1, 1939, at 5:44 a.m., Pittsburg time—at the same minute that the war started officially, through the Nazi invasion of Poland. May the time soon come when war will become impossible and the principals upon which the United States of America is founded may be free for all people to enjoy."

A February 21, 1943 article in The Milwaukee Sentinel recorded another interesting inscription:
"Members of the campaign committee have asked that donors write their names in the books the contribute. One which came in Saturday not only contained the name of a veteran of World War I and his division and company, but also the following notation: 'I was a sergeant top kick. I hope I hear from one of you boys. Good luck to all of you."
Posted by Andrew at 9:22 AM 0 comments