New Books and Articles about Publishing in WWII 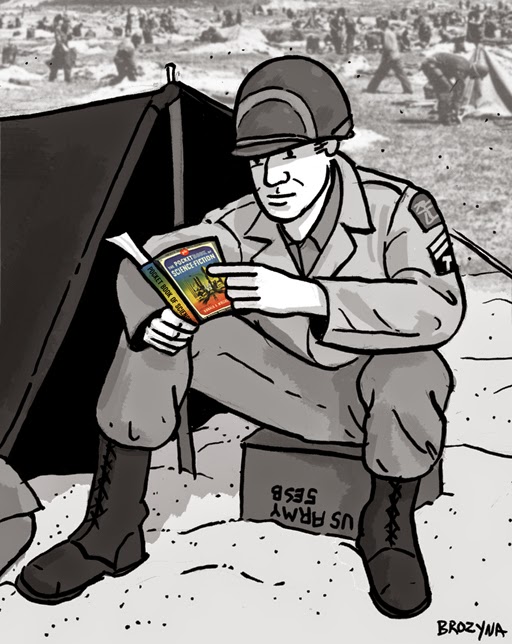 This month I was pleased to see some articles and books about publishing during WWII:

"How 'Gatsby' Went From A Moldering Flop To A Great American Novel" on NPR's Fresh Air, September 8, 2014. Author Maureen Corrigan discusses how the Armed Services Edition of The Great Gatsby lead to it's post-war popularity (starts at minute 23). For more info you can read a similar article I wrote "WWII-Era Book Giveaway Boosted Popularity of The Great Gatsby".

American Pulp: How Paperbacks Brought Modernism to Main Street is being published by Princeton University Press in October. It's about all kinds of pulp paperbacks, but there is a chapter about the Armed Services Editions.

When Books Went to War : The Stories that Helped Us Win World War II is being published by Houghton Mifflin in December.  This new book focuses on the Council on Books in Wartime, but there is a discussion of the Victory Book Campaign too.

"Victory Book Campaign brought reading to World War II troops" in the Emmons County Record. The author interviewed me back in the spring, but I only just saw the article.

"Victory drive mustered thousands of books in 1942" in the Times Tribune. This piece focuses on book drive efforts local to Scranton, PA.
Posted by Andrew at 12:01 PM 0 comments

The acronym NYPE appearing in the ship-shaped rubber stamp above stands for New York Port of Embarkation. New York City was one of the coastal cities where troops embarked to be shipped overseas.

From 1943 to 1945 the 52nd General Hospital treated wounded in the English Midlands. The medical staff was composed of graduates of Syracuse University College of Medicine. I found a photo of the hospital ward there on the US National Library of Medicine website. It looks like there is a stack of books on the table! New York Heritage also has a collection of photos of the hospital.

Ilag VII was a German internment camp built in Bavaria to imprison Allied civilians (mostly Americans and British) captured as German forces invaded Europe. The stamp above has the word geprüft which means "inspected and approved"—the Germans would not allow reading material that criticized their people or government in any way. This Marco Polo book was probably donated to the prison by the Red Cross.

The publishers who provided books as Armed Services Editions were very anxious to keep these paperbacks outside of the US (for fear of flooding the market). Military hospitals were eventually allowed distribute ASEs, but they were supposed to be destroyed after the war. This copy of Selected Short Stories somehow survived its stay at the Fairfield-Suisun Air Field hospital (now Travis Air Force Base, California).

The War Prisoners Aid of the YMCA sent spiritual, educational, and recreational materials to prisoners of war in Europe. This book was stamped by the sender in Switzerland (the stamp was not put there by the receiving library).