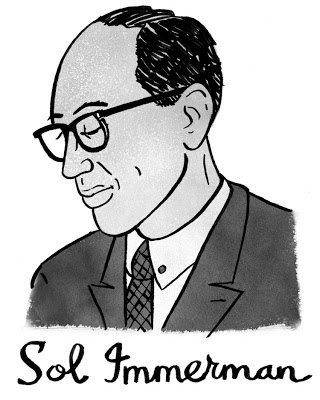 I wrote a little about book designer Sol Immerman in my post about his design of the Armed Services Edition paperbacks. Here’s a little more of a biography for the guy. It comes from The Book of Paperbacks: A Visual History of the Paperback Book (1981):

Born in New York; attended a public school in 119th Street. His original ambition was to be a dentist, but he later changed his plans and, in 1928, graduated from New York University as an art major.


Immerman often hung around his father's nightclub in Harlem, and he came to know many musicians and songwriters there. It was through these connections that he got his first job, as a designer of sheet music covers. He was extremely succesful: at one point his signature could be found on some 80 % of all sheet music published in New York.

He established his own design studio, located at 48 West 48th Street, in 1942; his partner was H. Lawrence Hoffman, their first employee was Robert Holly, and the signature IM-HO, which can be found on several Pocket Book and Popular Library covers, stands sometimes for Immerman and Hoffman and sometimes for Immerman and Holly. The studio produced covers for both hardcover and paperback publishers, and had some 40 firms as clients.

After several years of serving as parttime art director at Pocket Books in addition to his duties at the studio, Immerman became full-time art director for that house in 1947 and turned the studio over to Hoffman. He stayed at Pocket Books through 1975. A collegue says that, although Immerman was a good artist and calligrapher, he was often too busy to produce good work. There were times when he had to design five covers himself and supervise the design of a dozen others, all in the space of a few days. Some of his own covers were quite good; others, to be kind, were not.

In the late 1970s he was employed as art director for Penguin Books. He was, in 1981, a consultant, working out of his home in Yonkers, New York.
Posted by Andrew at 10:09 PM 0 comments

Email ThisBlogThis!Share to TwitterShare to FacebookShare to Pinterest
Labels: Personalities

One might say that this flimsy 5½ x 3⅞ inch paperback edition of The Great Gatsby was ultimately responsible for the book’s film adaptation nearly seventy years later. The Armed Services Edition program was a colossal government-sponsored book giveaway during World War II. Over 120 million paperbacks were distributed to American troops overseas. One of the titles included in the project was F. Scott Fitgerald’s The Great Gatsby. It was released at a time when literary critics were less than enthusiastic about Fitzgerald’s work and book sales of Gatsby were sluggish.


In Books in Action: The Armed Services Editions (1984) writer Matthew Bruccoli theorized on the Gatsby sales boost that returning GIs may have produced:

“There is no way to determine how many converts to literature—or, less elegantly, to reading—were made by the ASE. The fix was free. Moreover, it seems highly probable that some postwar reputations were stimulated by the introduction of authors in the ASE to readers who had never read them before. One hundred fifty-five thousand ASE copies of The Great Gatsby were distributed—as against the twenty-five thousand copies of the novel printed by Scribners between 1925 and 1942. Was there a connection between the ASE publication of Gatsby and Diamond as Big as the Ritz and the Fitzgerald revival that commenced in the late 1940s?”

The Armed Services Edition print run of The Great Gatsby was 155,000 copies, nearly eight times the book’s first printing in 1925. Soldiers and sailors tended to swap their books when they were finished reading. So, the real number of new readers introduced to Fitzgerald’s writing could have been much higher than number of copies circulating in the military. Both Gatsby and Diamond (with a print run of 90,000) were distributed after Germany and Japan surrendered. There were still millions of Americans overseas, and they had a lot of spare time for reading. It’s a convincing idea that these hundreds of thousands GIs who came home after the war sparked the new popularity of Fitzgerald, cementing The Great Gatsby’s reputation as a great American novel.

You can hear author Maureen Corrigan talk about this online in her September 8th interview on NPR's Fresh Air.

Cole, John Y. Books in Action: The Armed Services Editions. The Center for the Book, Library of Congress, 1984.

Read about The Council on Books in Wartime, the publisher of the Armed Services Editions.

Read about the history of the Armed Services Editions.

Read about the unique design of the Armed Services Edition paperbacks.
Posted by Andrew at 10:56 PM 2 comments

Reprinted editions of books popular in the civilian market, The Armed Services Editions were donated to GIs fighting overseas in World War II. The design of these books was driven by a need for minimal size and minimal cost.

The ASEs were sent overseas in supply ships that carried essential military supplies. Small books meant more copies could fit into a shipment, more paper could be used for the military’s massive record keeping, and a soldier could more easily carry one on his person. The US government paid for all publication costs. As a contribution to the war effort printers reduced their fees, while authors and their publishers agreed to forgo royalties. But with millions of books to be published, the government wanted the most economical printing solution.
Trim Size:

The Army’s graphic arts specialist in the Special Services Division, H. Stahley Thompson, proposed printing books in pairs on magazine/catalog size paper, binding, then trimming them apart horizontally. Many mail order catalogs were discontinued during the war years, so this left the equipment open to use. These roll-fed letterpress rotary presses were ideal for the ASE’s large print runs (50,000 per title).

Presses used to publish magazines like Reader’s Digest (5½ x 7¾ inches) could produce two books, each 5½ x 3⅞ inches. This was the size used for ASE books up to 320 pages. Books up to 512 pages were 6½ x 4½, which was half of a larger magazine or catalog. 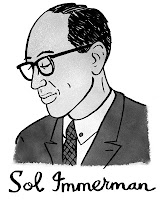 Illustrator/designer Sol Immerman was hired to create the covers of the Armed Services Editions. Sol ran a book design studio in Manhattan, and he was part-time art director at Pocket Books. His ASE book covers are interesting in that they were treated more like advertisements than actual book cover designs. The paperback cover depicted a photo of the hardcover’s jacket design with its title type treatment repeated to the side. The jacket photos were black and white, while the paperbacks’ background colors varied throughout the series. Sol earned $10 for each cover he designed. Unfortunately, I don’t know what his usual rate was.


Although I have not seen documentation explaining the ASE’s approach to cover design, I can use my own experience as a book cover designer offer some educated guesses. Following a simple template, these covers would be much faster to produce than a new cover. The purpose of a unique cover design is to attract the book buyer, but in this case there were no buyers. The Council on Books in Wartime, which published these free paperbacks, could easily have gone with a minimal two-color text-only cover as they did with their Overseas Editions. This approach would have saved even more time and money, but it would not be attractive to the intended readers: young GIs, many of whom were teens fresh out of high school. I’m guessing that it was Immerman who suggested that the printing budget be large enough to accommodate colorful covers.

American book publishers donated their titles to The Armed Service Editions (the publisher received only half a cent for each book printed). While, this contribution was in support of the war effort, I am sure that publishers saw these free books as promotion to future book buyers. If a GI enjoyed reading an ASE book, The Call of the Wild for instance, then it was hoped that he would buy the hardcover when he returned home. The fact that ASE book covers looked so similar to advertisements is probably no accident.

The main thing to note about the interior design of the Armed Services Editions is that the text was not set in a single column as with a typical hardcover of the time. Composing the text in two columns was useful because it allowed more text to fit on each page (which means less pages and less paper needed). The text appears to be 10 point Caslon with 11 point leading. Comparing to some 1940s hardcover books I own, the ASE text is one or two points smaller.

Check out this website for a whole bunch of scans of ASE covers.

Schreuders, Piet. The Book of Paperbacks: A Visual History of the Paperback Book. Virgin Books, 1981. This book includes a bio of Sol Immerman, and a description of WWII era paperback book publishers.
Posted by Andrew at 11:18 PM 1 comments