On the New York Public Library website I found these 1939 photos of a small press and bookshop housed in 30 Rockefeller Center Plaza. Jewish immigrants Isaac Molho and Vitalis Crespin opened Librairie de France in 1935. During WWII their shop served as an important voice of the oppressed people of Nazi-occupied France. It featured the books of French authors who had fled their country after the German invasion. The most famous of these books would have to be The Little Prince by Antoine de Saint-Exupéry.

In October of 1944 (after the Allied liberation of France) the exiled French writer Jacques Maritain voiced his great appreciation for Librairie de France:

I congratulate the effort the Librairie de France made to help maintain French culture in the New World during the Second World War. In the very dark days of 1940, when disaster overwhelmed hearts, when the surrender accepted by the Vichy government announced publicly that France was defeated, and American schools diverted the study of French language in favor of Spanish—the launch in New York [of a publisher] in French editions appeared foolish. Aware of their moral responsibilities towards France, the directors of the Librairie de France had enough energy and ambition to take this initiative. They began their task as editors in the Autumn of 1940.

In the free land of the United States, the works of French expression could thus continue to appear, and try to give a voice to the gagged people of France. Through the walls of [German] censorship, French authors could continue to appear in spirit and in reality—along with a few books passed as contraband, and a day will come when the French people will read [the books] that where written for them. [It would be many months before book publishing and book sales returned to the newly-liberated French]

[The directors of Librairie de France] could also continue to give witness [to work written from within occupied France]. No longer receiving anything from France, the general public was for a moment disconcerted. And all those in the New World who cherish French language and thought could continue to hear the voices of the oppressed writers of France who did their best during the silence imposed by force. The liberation of the country will finally allow them to make known in France and the world the works prepared during four years of darkness or heroically published as clandestine editions.

Since 1940 the Librairie de France has been a considerable achievement, which proclaims both the vitality of French culture in this country and the depth of the Franco-American friendship, and it served usefully this culture and friendship. I would like to express to the Librairie de France the recognition of a French writer who found with her the most dedicated cooperation in everything he undertook to serve on this hospitable land the cause of France and freedom.

I copied the above quote from this page on the store's history. I ran it through Google Translate and cleaned up the broken English. I added my own notes in brackets.

Librairie de France closed its doors in 2009, but it still runs a mail order business online.

Email ThisBlogThis!Share to TwitterShare to FacebookShare to Pinterest
Labels: bookstores and libraries

Some time around 1940 the libraries in Minnesota's District 4 (the area around St. Paul) had a special lending program where books were shelved in stores around town. This must have been a valuable service in the days when inexpensive books were hard to come by. Remember: paperbacks were not yet widely available. These images all come from the Minnesota Historical Society.

Email ThisBlogThis!Share to TwitterShare to FacebookShare to Pinterest
Labels: bookstores and libraries

WWII Victory Book Campaign to be Aided by Milkmen

I came across this 1942 newspaper ad while researching my book (my grandfather welded tanks at ALCO, which this ad congratulates for being awarded a military production award).

During WWII American dairies were eager to seen as important contributors to the war effort. Reading the ad copy, I almost laughed at the self-important tone: "Always the number one defender of public health, the dairyman today assumes a heavy role in the critical task of keeping a nation at war strong and healthy." I suppose the claim isn't too far off the mark when one considers the health risk unsafe milk could pose. The older generation would have remembered a time when pasteurization was not yet in widespread use (and foodborne was illness more common). Still, illustrating a milkman with the marching troops and tanks seems a bit much.

In 1943 the nation's dairies joined the Victory Book Campaign in collecting books to donate to the armed forces. The January 18th issue of The New York Times reported:

"The 1943 Victory Book Campaign for the collection and distribution of books for men in the armed forces will receive practical support from milkmen throughout this area within the next few days. Housewives who have been in the habit of writing notes for the milkmen, telling him how much milk and cream to leave, will now receive notes from the milkman, urging them to wrap up and leave some books alongside their empty milk bottles.

The milkmen will pick up the books and take them to milk distribution centers from which they will be handed on to the nearest library for ultimate distribution to the armed forces. In this plan, such milk companies as Borden's*, Sheffield's and the Dairymen's League have received support from the milk drivers' union.

The Victory Book Campaign is being conducted under the sponsorship of the American Library Association, American Red Cross and USO."


Wartime milk bottles and caps were often printed with patriotic graphics and messages like, "Buy War Bonds," "It's Great to be an American," and "Food Fights Too. Plan All Meals for Victory."

In the US and Britain milk supplies were low due to the bulk of food sent to feed the troops. Food rationing began in Britain in 1940, and in the US in 1942. Priority was given to households with pregnant women and babies.

Over in Britain the milkmen truly were in the line of fire. British dairies kept up deliveries during the German bombings. If a milkman reached a home that had been bombed he would still leave the bottles, trusting that a neighbor would get it to the customers if they had survived. British customers were encouraged to save the aluminum foil caps and donate them as scrap metal.

*As an amusing aside: do you remember Borden's milk? We used to get it when I was a kid. The cartons pictured a cartoon cow as their mascot. Elsie the cow was married to the bull from Elmer's glue! I've never heard any other corporate mascots being romantically involved.

Zebrowski, Carl. "Enough to go Around" in Home Front Life: a special publication of American in WWII magazine. 2012.
Posted by Andrew at 11:11 PM 1 comments

I found this 1943 photo on the Imperial War Museums' website. The caption reads:

A Ministry of Information car and display van carrying a salvage exhibition for the Ministry of Supply Directorate of Salvage and Recovery, photographed outside MoI headquarters at Senate House in London. The car has the words 'Private Scrap is in town...come and meet him' painted on the side. The van itself has a special bin for collecting books 'for the forces, blitzed libraries, and salvage', and the side of the van features a series of wooden display panels by artist Bruce Angrave. The salvage exhibition continues inside the vehicle.
Posted by Andrew at 9:59 AM 1 comments

Email ThisBlogThis!Share to TwitterShare to FacebookShare to Pinterest
Labels: British publishing in WWII 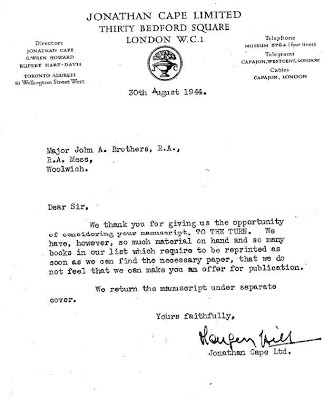 Today the Twitter account for the British publisher Jonathan Cape posted a 1944 rejection letter to a hopeful author. Poor Major Brothers was turned down because of wartime paper rationing.
Posted by Andrew at 12:55 PM 2 comments