In 1942 and 1943 the Victory Book Campaign collected millions of donated books to give to American troops entering the war. To research the VBC, one of the first things I did was find a copy of the organization's annual report. The following quote appeared in a paragraph about coverage in the media:

"The flying eagle with his bundle of books was widely used, some papers carrying it and its V.B.C. message daily throughout the campaign. This was a most successful symbol and a superior design made for the committee by Clarence Hornung, America's leading artist in the field."

As a graphic designer I was immediately interested in this Hornung guy. Why had I never heard of "America's leading artist in the field"? A search on Google didn't turn up much. I found a couple blogs with short posts about Hornung. From these I learned that he designed logos for many of the top book publishers and book printers of the day.

In 1930 Hornung authored a book featuring some of his best logos up to that time. Last month I bought a copy of Trade-marks, and was impressed to see a book with such a high production value. A single logo was printed on each page, surrounded by an debossed border. To accommodated the debossing, the signatures were not trimmed (the pages are double with a fold at the top edge). What an extravagant use of paper! I doubt a book like this could have been published ten years later when wartime paper rationing was in effect.

The book presents an impressive collection of logos, many of which belong to book publishers. The word "logo" was never used in this 1930 edition. They are all labeled as "trademarks". Dictionary.com places the origin of the word "logo" as 1937. Fellow book designers will be interested to learn that Hornung's book was one of the 1932 winners of the AIGA's 50 Books of the Year, a design competition which evolved into 50 Books, 50 Covers (2011 was the last year the AIGA sponsored this 90-year-old competition).

Trade-marks unfortunately has no information about the man himself. A blog post metioned that there was a description of Hornung in the 2004 book Logo, Font & Lettering Bible by Leslie Cabarga. I quickly bought a copy, but I was disappointed to see there is only a few pages about Hornung, and the only text is limited to short captions. I contacted the author to see if he had any more information to share. It turns out that Leslie had known Clarence Hornung personally. He had a collection of Hornung's work, along with a short type-written autobiography. He was willing to sell me the collection, so I eagerly purchased the portion of the design work relating to WWII. 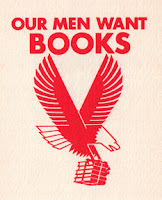 I'm pleased to say I know now all about this remarkable designer and the part he played in supporting the war effort. Clarence was a great admirer of the eagle in American art. In fact, in 1943 he loaned his extensive collection of historic eagle coins, medals, and sculptures to an exhibit at the Cayuga Museum of History & Art. When he received the VBC assignment he must have been thrilled to have the opportunity to work with his favorite motif. The eagle is, of course, an appropriate symbol for an organization charged with assisting America's military men. I especially like that the wings form a "V" for victory.

The Victory Book Campaign wasn't the only patriotic project Clarence Hornung designed. He created logos for a variety of US government programs shortly before and during the war. He displayed these in his self-promotional booklet, How to Make Government Propaganda More Effective. This is one of the pieces now in my collection. It seems Hornung produced the booklet to encourage government organizations to hire him to design symbols for their wartime programs. His text in the booklet describes the importance of a strong visual mark to influence the audience:

"These trade-mark emblems are the simplest and most forceful means by which an association of ideas can be presented to the public. ...The recurring symbol, so thoroughly American in its characteristics, becomes a bull's eye of thought and action, hitting squarely, fiercely. Let us have more direct knock-out blows whether these be on the battle front or the home front. Let our propaganda efforts be representative of the best available advertising genius."


I should mention here that in the 1940s "propaganda" wasn't the dirty word that it is now. It was merely the propagation of ideas. These days the same efforts go by the friendlier terms of "public relations" or "marketing".

More About the Man:

Clarence P. Hornung (1899–1997) had an impressive design career, yet he is all but unknown today. The son of German immigrants, he was born and raised in Manhattan. During the first world war he was a lieutenant in the US Army, training military students in Stateside. After the war he returned to College of the City of New York to study advertising and commercial art. He worked in-house at an unnamed advertising firm for less than a year when he left to start his own business. In his short autobiography he wrote about becoming a freelancer. As a solo designer myself, I can appreciate his sentiments:

"...I felt encouraged to venture on my own, confident that my ability and youthful enthusiasm would see me through any rough period. ...no one had warned of the uphill struggle which could be either 'feast' or 'famine' when commissions could not be counted on with any degree of regularity."

Hornung's biography includes the text from his first business announcement, which he issued in 1923. I quite like the way this self-promotion is worded:

"Having returned from his wedding trip the artist (Clarence Pearson Hornung) is pleased to announce that he is prepared to accept whatever commissions his patrons or patrons-to-be may entrust to his care for the designing of magazine and newspaper advertising, fine books, brochures and catalogs."

Over the decades Hornung produced a wide variety of works. He engraved decorative borders. He designed typefaces, including a monospace face for IBM's first electric typewriter. He was a design consultant for Coca-Cola. He designed automobile ads and sales catalogs for for Rolls-Royce, Packard, and Locomobile. Of great interest to me, Hornung also wrote about his work in book design:

"The field of book publishing offered many opportunities for me: the design of the complete book, publishers' colophons and especially bookbinding design. One commission, I recall, gave me particular joy as it presented the opportunity to decorate covers of the Encyclopedia Britannica's 14th edition issued in 1929."

If Clarence Hornung had a specialty it was logo design:

"Since 1915 when I received my first commission as a youngster it has been estimated that I have drawn about five hundred trade-marks in great variety including commercial marks and logotypes, personal signets, monograms, printer's devices, publisher's colophons, association emblems, university seals and private press marks."

Hornung authored multiple books, which were collections of historic graphics. He drew great "personal satisfaction" from these pet projects. Today's graphic designers might be familiar with Handbook of Designs and Devices, which was first published in 1946 and is still available from Dover Publications.

In studying the Victory Book Campaign logo my initial goal was to offer some insight into marketing the WWII program to the public. Having been impressed by Hornung's career, I hope that my post will also help illuminate the accomplishments this forgotten personality of graphic design.

"Clarence Hornung, The Master of Marks" on Letterology blog.

I just bought the above 8 x 10 photo on eBay. It was a publicity photo which appeared in a Detroit newspaper in February 1943. The original caption read, "St. Charles Church Book Drive: Boy Scouts John Uren, Fred Fournier, and James McGill. Mrs. James M. Payne and Mrs. Arlon B. Clarke." Based on their uniforms I can tell the women are members of the American Women's Voluntary Services. You can see the pin at left on the women's caps. This organization and the Boy Scouts both participated in the Victory Book Campaign in 1943.

From a graphic designer's point of view I was also interested to see how this photo was touched-up to print in the newspaper. First of all, there are grease pencil marks on the sides to indicate where they wanted the image cropped. Areas that were too dark (like the jackets) were highlighted with a little brushed on white paint. The edges of some of the faces were outlined in pen to differentiate from backgrounds that are the same tonal range. And it's interesting to see the rather sexist way of naming the two women. We don't learn their first names, only the names of their husbands: "Mrs. James.." and "Mrs. Arlon..".
Posted by Andrew at 11:22 PM 0 comments

In WWII publishers donated their books to the troops, and they used dust jackets to encourage readers to donate their own.

In 1942 and 1943 the national Victory Book Campaign raised books to donate to men in the armed forces (see previous post). Campaign organizers invited individuals from the book publishing industry to join their efforts. The Publishers Committee was formed within the VBC to solicit and organize publisher donations. It also encouraged book publishers to create public awareness for the Victory Book Campaign. Accordingly, the nation's book publishers promoted the VBC in magazine ads, and they printed notices on dust jackets encouraging readers to donate the book after reading. I found a few examples online:


The Victory Book Campaign's nine-person Publishers Committee was composed of:

In 1943 a total of 200,000 books were donated by American publishers. The American Mercury added 10,000 books to their previous year's donation. Pocket Books, Inc. donated over 60,000 of their books. Pocket Books was a mass market paperback publisher founded by Dick Simon, Max Schuster, and Robert Fair de Graff in 1939. The Book of the Month club supplied 57,500 books.