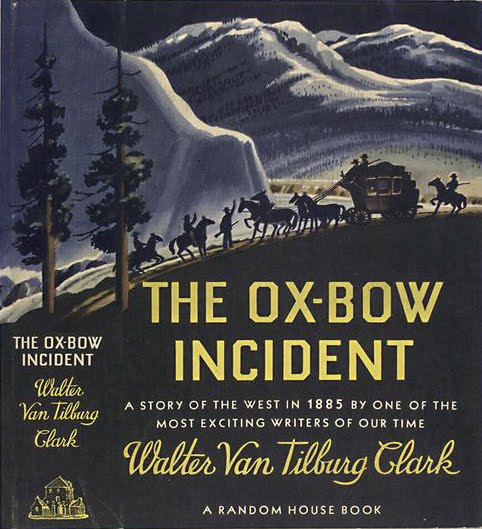 Today fellow book designer Misha Beletsky tipped me off to the fact that the New York Public Library hosts a digital gallery of historic dust jackets. This is a great resource to see the kinds of book covers readers found on the shelves in the 1940s.

The gallery offers covers from the 1920s to the end of the 1940s. The Oxbow Incident (1940) pictured above was one popular western reissued for the troops in the Armed Services Editions.
Posted by Andrew at 3:39 PM 1 comments

This August Osprey Publishing will be releasing my book Longshore Soldiers. I've kept up with the veterans who I interviewed. Not too long ago Solomon Fein told me how he would read books during his off-time on Utah Beach. This had me wondering how he and fellow GIs in a war zone got their hands on these books. It turns out there were a variety of civil and government organizations during the war that worked to put free books into the hands of American servicemen. Only weeks after D-Day liberated French civilians were buying carefully picked American novels and nonfiction. Before the end of the war thousands of German prisoners were also buying American books. Some of these book distribution projects were public, while others were top secret. The British had similar programs, sometimes working with the Americans, sometimes in competition.

As someone who works in the publishing industry and enjoys WWII history, I found this absolutely fascinating. I'm starting this blog to chronicle what I learn. Very little has been written on book publishing's role in the war. There are few scholarly books on the subject, and most of them were only recently published. This blog will review these books, describe the various wartime publishing programs, and share resources. I hope my own observations can contribute to this overlooked subject of military and publishing history.

Council on Books In Wartime - a nonprofit group organized by the major book publishers of wartime America. Its goal was to use books to increase morale and explain issues raised by the war.

Office of War Information - a government organization created in 1942 to increase morale through publicity and propaganda.

Victory Book Campaign - a nation-wide effort to collect books to be donated to men in the armed forces. It was sponsored by the American Library Association, the Red Cross, and the United Service Organizations (USO).

Armed Services Editions - a series of popular books published as pocket-sized paperbacks specifically to entertain the men in the armed forces.

Fighting Forces - a series of books published by the Infantry Journal made available to the troops.

Overseas Editions - paperbacks distributed in the newly-liberated countries of Europe and Asia. These were popular examples of American nonfiction and fiction, which were chosen for their incidental pro-American propaganda value.

Transatlantic Editions - an American project related to the Overseas Editions, but published in London, rather than the US.

War Department Pocket Guides - paperback guidebooks commissioned by the government to introduce soldiers and sailors to the foreign countries and people they would encounter.
Posted by Andrew at 11:35 PM 0 comments